I don’t remember where I read or heard it, but a short while after my grandfather died I learned that seeing a cardinal was a visit from a dearly departed.

I likely subscribe to the Cardinal Theory due to the vast number of cardinals who call the gnarly vines, branches, and slightly alive trees on the Northside of our house, their home.

Prior to my Papa’s passing, I never paid the birds much attention.  But since the days surrounding his burial, I’ve been acutely aware of the all the boy and girl red beauties spicing up the otherwise bare and brown pre-spring landscape out our kitchen window.

Multiple visitors continue to drop in every week.  Including yesterday…which for a variety of reasons felt particularly significant.

Having spent so much time this past week engaged with family, loss, and the power of connection, Ken and I decided to do some research into our combined family tree.

There’s something incredibly empowering about tracing your roots and seeing just how far your branches reach.

The night before, we learned that the first Herman Goodwin – the name, my beloved father in-law carries on, was born on March 17, 1891.

I may have shared before that I was so determined, felt so destined to become a Goodwin that Ken and I actually delayed our honeymoon.  Given that we were married in my small hometown of Rindge, New Hampshire, the folks in the town office worked with me to get my marriage license from the state in record time.  Making it possible for me to be in line at the Social Security office in Lowell with all of my necessary paperwork for an official name change, in less than a week from the day that Ken and I exchanged our DIY vows.

So, really it comes as no surprise that when Ken read off his great-grandfather’s birthday, I cried.

Now I know that Mr. Goodwin and I share a last name, a birthday, and years of our beginnings are made up of all the same numbers.

And, so, when I saw a Mr. Cardinal proudly and brilliantly darting a glance my way early the next morning, I smiled.

Thank you – I said, without a word – And I’m sure it goes without saying – but, in case it needs to be said, please let the entire flock know that there’s always plenty of room here. 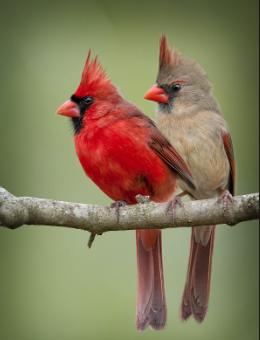