Last night my team hosted a Moth StorySLAM at the Life is Good Tavern.

The Moth is one of the country’s leading storytelling organizations.  Their podcast is downloaded about 30 million times a year, and their public radio show is heard each week on 400 stations.

Their concept is simple: True stories told live – with no notes.

One major way that they collect content for their podcast and radio show is by hosting these open-mic StorySLAMS.  Each SLAM has a theme.  Last night, our theme was, “Silver Linings.”

Anyone who wants to share a six-minute story on the given theme, can throw their name in the hat.  Last night, I threw my name in, got picked, and this was the story I told:

So, I’m in one of Boston’s most infamous bars – a quarter naked – held together by the teensiest-tiniest string across my back.

Now, the reason for the backless shirt and debaucherous night out was my belated birthday.

“You’ve earned this,” were the exact words my former college roommate Lynne said as she tied my into that very revealing and near shear halter top.

And I did, and even I had to admit – this was my window to get away with this.  I was barely 23, weighed about a buck-five, and my back, my shoulders, arms and neck were the leanest and loveliest they’d ever been.

But, I knew when Lynne mentioned “earning” it, she wasn’t talking about my newfound devotion to the elliptical, or steady diet of green apples and peanut butter and black beans and tofu.

She was talking about breakups and baseball.

Twenty-two was the year of racing to Planned Parenthood for every STD test available, and hastily moving out of the shared apartment that he refused to leave, even though I was the one who put down first, last, and security.

And just to add insult to injury, 22 was also the year that the first great love of my life, the Boston Red Sox, were the best team in baseball.  Up until the 11th inning of Game 7 of the American League Championship Series when New York Yankee, Aaron Boone caught the sweet spot off Tim Wakefield’s knuckle ball and knocked one out of the stadium to clinch the pennant for the Evil Empire, and crush the Sox’s Series dreams once again.

To put it simply, 22 was the year of the curse.

But, this was 23.  And here I was in my favorite city, with a fairly new body, approaching a new baseball season, and out with a new group of girls that my friend Lynne assured me would be perfect company for such a momentous occasion.

So, when one of them raised her cosmo and said, “Let’s do a toast for Amanda’s birthday,” I was all in.

“Here’s to Amanda.  And Derek Jeter.  And Aaron Boone, and the New York Yankees.”

She was clearly a New York fan and this was suppose to be a joke, but I wasn’t laughing.  I drew down my drink and inadvertently bumped the arm of the guy standing in back of me. And then I just let it all out.

Now that guy just let me go one until I was done and then with a big smile he said, “You have to fucking meet my friend Kenny.”

And when it was closing time and I was about to get in my cab, and he in his, I reminded him that I didn’t actually live in Boston.

“I live in southern Connecticut – and while on a map that may be in New England it’s really in the heart of Yankees, Rangers, Jets, Giants country – so, you should call me tomorrow and we should get breakfast while I’m still here.”

And then he kissed me, but he didn’t call.

And he didn’t call.

When he finally did call after the third night, and I asked him what took so long, he asked me if I had ever seen the movie Swingers.  And while I pretended to be annoyed, I actually have a deep love for all Jon Favreau film, so the conversation continued.

We ran into a marathon discussion.  We talked Boston, baseball, family, embarrassing high school moments – and then we did the same thing the next night.  And then, the next day Kenny didn’t even wait until after work to call, he called me on my way into work and that’s when I finally confessed…

And he said, “Well, I’m not gonna tell you to have a good time, but keep my number and if you are in Boston anytime soon, call me.  I’d love to hang.”

I said okay and quickly hung up the phone.

I went on my date.  Blah.  And a couple of nights later took myself to the movies.  A nine o’clock showing of Kill Bill 2.  When I got out around midnight and turned my phone back on, I saw I had a message from Kenny Goodwin.

My first inclination was just to delete it, because I was pretty sure this was going to be awkward…but then I realized I was sitting alone in my ’92 Kia Sephia outside of a theater in Bridgeport…awkward was the least of my worries.

So, I hit play and could immediately tell that wherever Kenny was calling me from, he was outside.

“Hey Amanda, it’s Ken.  Look, I heard what you said the other day loud and clear, but I also know that you’re lifelong Sox fan who’s never been to Fenway.  So, I thought you might like to hear what the third-base line sounds like tonight at the first Sox-Yanks match-up of the season.”

And he turns the phone into the crowd and all I can hear is: “RAHHHHHHHHH!”

And him edging them on to get “loudah.”

And then he brings the phone back to his mouth and he says:

It’s worth noting that this would go on to be the season that the Red Sox win the World Series for the first time in 86 years.

It’s also when I found my teammate – who went on to become my boyfriend, my roommate, my fiancé, my husband, and the father of our son.

And whenever I think of the story of us, I’m reminded of how back breaks, questionable shirts, horrible jokes, and tough losses can all just be an elaborate set-up for one incredibly Good Win.

And wouldn’t you know…I won the StorySLAM.  I’ll be invited to take place in a Boston GrandSLAM later this year.

Though, really I think the credit belongs to Ken.  After all, he made the call.  I just told the story. 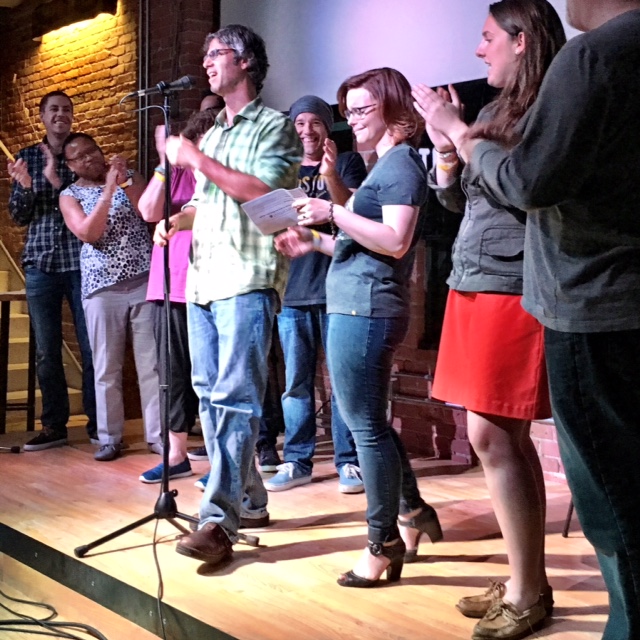