My son and I ended up at my mother’s today.  The trip wasn’t planned, but worked out really well.

While my parents prepped their garden, Briggs and I played hockey and Wiffle ball in between snacking on fruit salad and graham crackers.  Toward the middle of the afternoon my Grandmother (who lives just up the street) came down, sat in as catcher, and after all of us had enough of the heat, we made our way inside to catch the bottom of the 9th.

The Red Sox were taking on the Baltimore Orioles at Camden Yards.  We won.  Briggs was happy.  Burgers went on the grill.

After dinner, the six of us took a ride to visit my Papa’s grave at the Massachusetts Veterans’ Memorial Cemetery.  On the way there, Briggs asked where we were going and why, and I told him.

I’m not sure that Briggs remembers Papa.  He wasn’t even yet two when my Grandfather left this world.  I am positive though, that he knows my Grandmother, his Great Grammy, and he knows that Great Grammy and Papa go together.  And he loves the picture that Great Grammy has in her house of Papa holding him as a preemie…and so, he knows enough.

He knows there is love.  Endless, unconditional love.

After my Mom placed a bouquet next to Papa’s headstone, she asked Briggs to run back to our car to fetch my phone.  She wanted a picture.

Briggs happily obliged and as I started to follow him back to where we were parked, he turned around and said:

The car was in clear view, so I let him go on alone.  I watched him carefully navigate the paths around the other headstones, and then I watched him stop short of the car.  Initially, he’d passed this one particular headstone, just as he had all the others, but this one called him back.

The flowers that someone had loving set up beside this headstone had toppled over.  Briggs quietly returned to fix them – unaware that I or anyone else was watching him.

I know that Papa is not in that field, but his spirit of generosity, kindness, and service certainly shined through my boy early this evening – and for the first time I got a good, clear view into what legacy looks like. 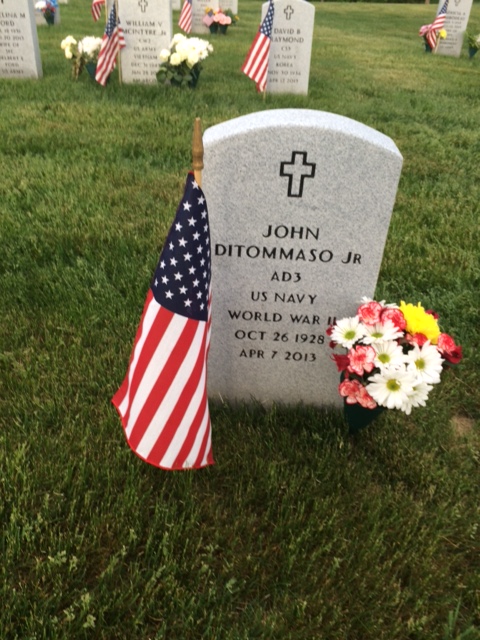